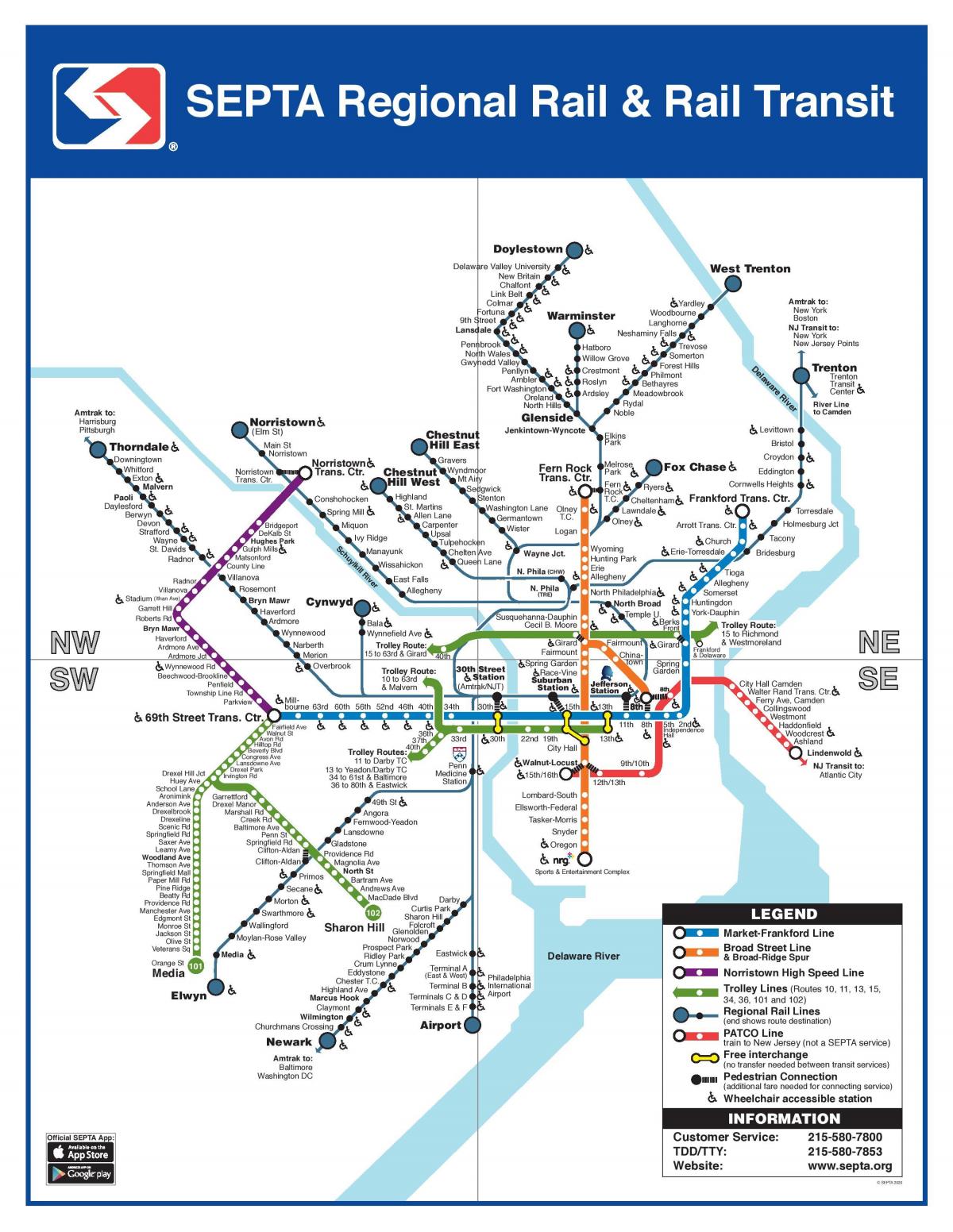 The Schuylkill Valley Metro was a proposal for a 62-mile railway system that would link Philadelphia, Pennsylvania with the city of Reading, Pennsylvania in central Berks County, USA as you can see in Metro map Philadelphia, using the SEPTA Manayunk/Norristown Line and Cynwyd Line, as well as two current freight-only rights-of-way owned by the Norfolk Southern Railway. The plan, rejected by the Federal Transit Administration, is currently without funding, and the probability that SEPTA will ever construct it is unknown. The SVM plans included stations currently used by SEPTA, along with new stations north of Norristown. As the SVM cars would only have motormen, and to allow compliance with the Americans With Disabilities Act, all existing and new stations would be built with high-level platforms.

The Market-Frankford Line (MFL) and Broad Street Line (BSL) make up SEPTA subway system as its mentioned in Metro map Philadelphia, carrying hundreds of thousands of residents and visitors through Philadelphia every day. The MFL, often referred to as the blue line because of the color of the line’s seats and signs, travels an east-west path through the city, with stops in popular neighborhoods like Fishtown, Old City and University City. Both lines provide 24-hour service for late Friday and Saturday night travel. Known most commonly to locals as the El, the line is elevated for parts of the ride, giving passengers a bird-eye view of bustling business corridors, the expanding skyline and West Philly’s beloved Love Letters murals

The BSL, also known as the orange line, runs between North and South Philadelphia beneath Broad Street. NRG Station — the final stop at the southern end of the line — is just steps away from the Wells Fargo Center and Lincoln Financial Field, making the BSL a great way for fans to get to Eagles, Phillies, Sixers and Flyers games as well as concerts and other events around the stadium complex as its shown in Metro map Philadelphia. The line also stops near South Philly dining and shopping destinations like East Passyunk; North Philadelphia attractions like the historic Divine Lorraine Hotel and refurbished Met Philadelphia performing-arts venue; Olney North Fifth Street business corridor; and Center City neighborhoods like Chinatown, Logan Square, Rittenhouse Square and Midtown Village. 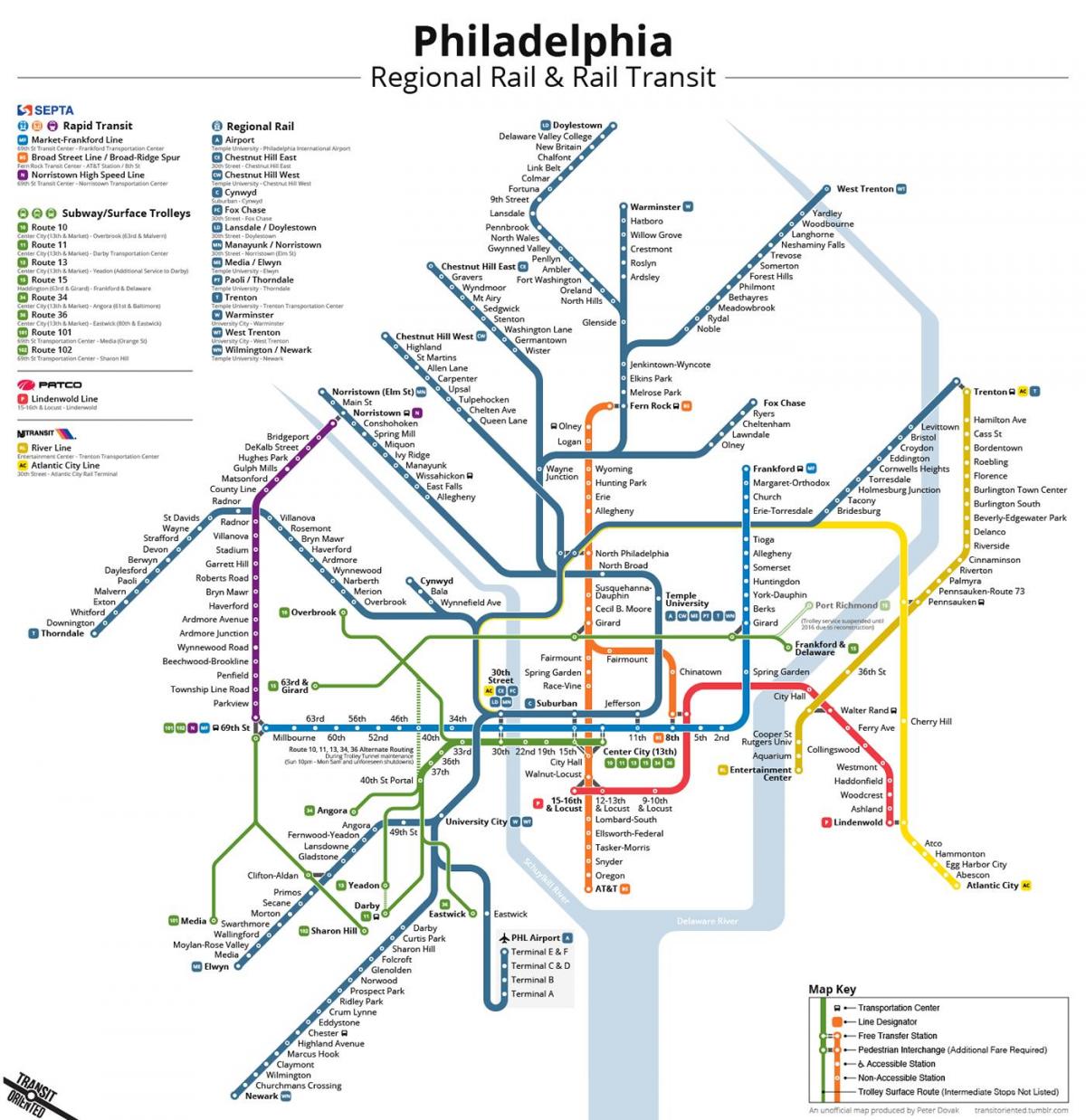 The Broad Street Subway is the main subway line in the city and only runs south along Broad Street, which is the city’s longest street. This means that you can not get lost on this train, which only runs north and south. You can reach the subway via the many stops along Broad Street – from South Philadelphia to North Philadelphia. The city other SEPTA subway line is the Market-Frankford Line (also called the “EL”) as its shown in Philadelphia subway map. This runs across the city (east and west) and can be reached through many stations across the city.

Two subway/elevated lines service the heart of the city. The two lines intersect at City Hall (15th street) station for a free connection as its mentioned in Philadelphia subway map: The Market-Frankford Line (the “El” or Blue Line) runs east-west with key stops at 2nd street (Penn Landing), 5th Street (the Historic District), 11th Street (Convention Center and Reading Terminal Market), 15th Street (City Hall) and 30th Street (connection to Amtrak). The 11th, 15th, and 30th Street stops all have convenient access to the SEPTA Regional Rail Lines. The 8th Street stop has a convenient connection to the PATCO High Speed Line. The Broad Street Line (the Subway or Orange Line) runs north-south and will take you from City Hall (15th Street) to the sports arenas at the Pattison Ave stop (Citizens Bank Park, Lincoln Financial Field, and Wachovia Center).