You can find on this page the Philadelphia buses map to print and to download in PDF. The Philadelphia bus system map and the Philadelphia trolley map present the network, stations and lines of the buses and trolley of Philadelphia in Pennsylvania - USA.
Over 70 bus routes service the city of Philadelphia and surrounding area as its shown in Philadelphia bus system map. Useful bus routes include: the #38 bus which can take you from Independence Mall to the Franklin Institute and the Art Museum; the #21 bus that can take you West from Penns Landing to University City via Walnut Street and returns East via Chestnut Street; the #44 bus connects Center City to the City Ave hotels and has a stop close to the Barnes Foundation in Merion; the #124 takes you from Center City to the King of Prussia Mall; the #125 also stops in King of Prussia and certain buses continue on to Valley Forge National Park. 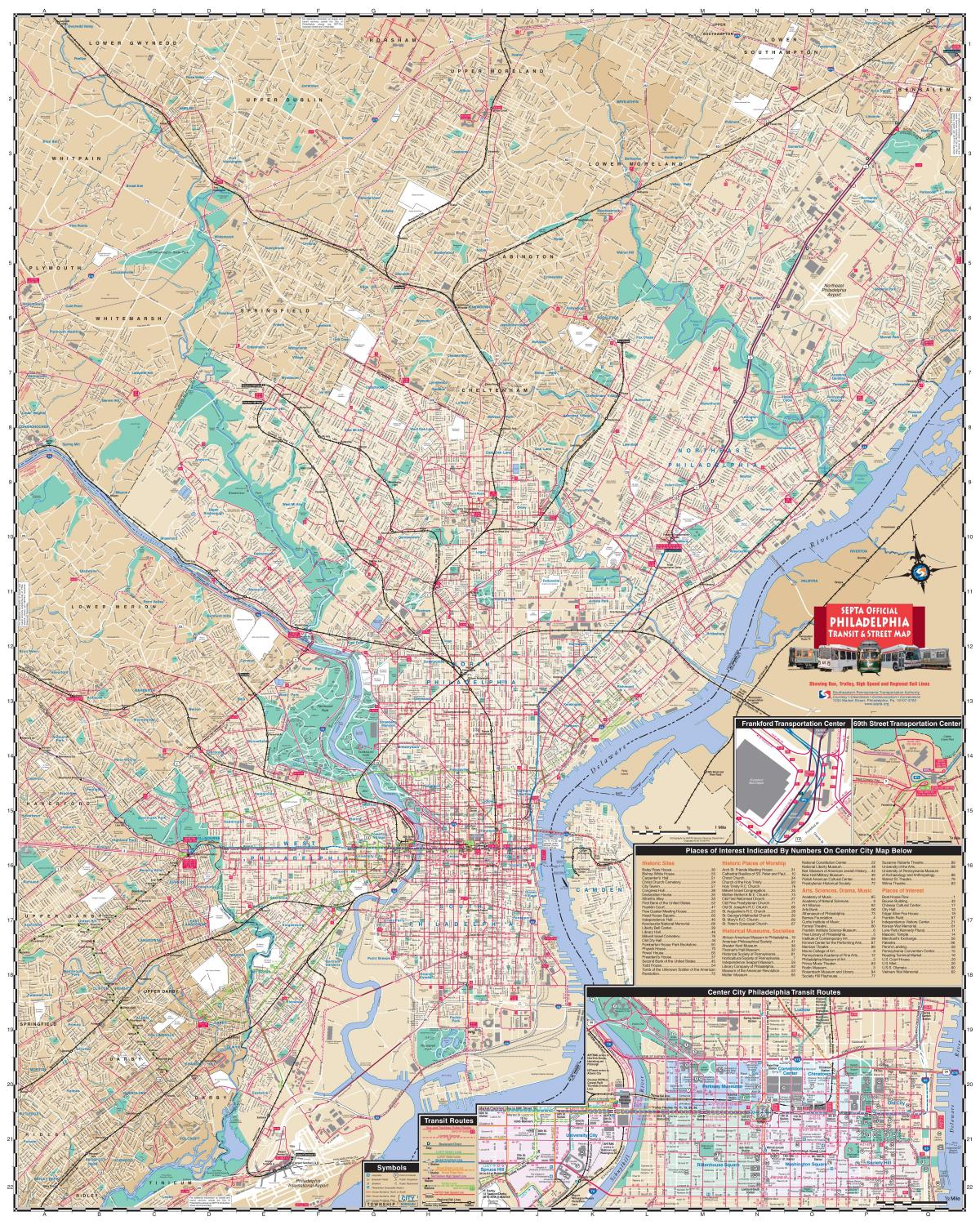 SEPTA lists 117 bus routes throughout Southeastern Pennsylvania, with most routes being within Philadelphia. Some of SEPTA bus routes run 24 hours a day ("Night Owl" service), although most routes end by late night. SEPTA bus service consists of its City Division for routes within Philadelphia, Victory ("Red Arrow") Division for routes in Chester, Delaware, and Montgomery Counties, and its Frontier Division for buses to Montgomery and Bucks Counties. Other bus routes are its Regional Rail connector routes, the "Night Owl" bus service replacing the Market-Frankford and Broad Street subway lines during their closure, and other specialized services. SEPTA leases buses for third-party charter routes, and runs the charter buses for the School District of Philadelphia. The City Transit Division runs 76 bus routes, and the Suburban Division runs 44 bus routes as you can see in Philadelphia bus map. In 2009, SEPTA had a fleet of 1153 revenue buses for its City Transit Division, and 262 revenue buses for its Suburban Division.

The primary intercity bus station in Philadelphia is the Philadelphia Greyhound Terminal, located in close proximity to The Gallery at Market East as its shown in Philadelphia bus map. Greyhound Lines operates its intercity buses from the Philadelphia Greyhound Terminal, which was the second busiest Greyhound bus station in the United States in 2008. Greyhound Lines operates one-seat bus rides to a variety of destinations, including Washington, New York, Atlantic City, St. Louis, and Atlanta, and provides connecting service to other destinations via transfers. Other private companies which operate from the Greyhound Bus Terminal are Bieber Tourways, Capitol Trailways, Martz Trailways, Peter Pan Bus Lines, and Susquehanna Trailways. MegaBus and BoltBus, both discount bus lines, operate out of 30th Street Station. Chinatown buses, which travel between the Philadelphia Chinatown and Chinatowns in New York City and Washington, provide low-cost intercity bus service.

Think of the trolly as the same as riding the bus. The SEPTA transportation system also features trolley cars, which run on tracks in certain neighborhoods. As far as fares go, they operate the same as buses, although some run underground for several stops in center city Philadelphia. SEPTA formerly ran trackless trolleys along Routes 29 and 79 in South Philadelphia as its shown in Philadelphia trolley map, but replaced those services with diesel buses in 2003. In October 2006, the SEPTA board voted not to order additional vehicles for Routes 29 and 79, making them permanent diesel bus routes.

Easy to use, the SEPTA Key fare program makes taking public transportation less complicated as its mentioned in Philadelphia trolley map. The Key fare program is a reloadable chip card for travel on most of Philadelphia transit options: (buses, trolleys, subways, the Norristown High Speed Line), and Regional Rail. Customers can purchase a key card and load a weekly or monthly pass. There are several options, depending on your transportation needs. These include: TransPass; One Day Convenience Pass; and Independence Pass.